- Op-Ed: Welcoming The Charedi Spring
“tyranny of fanatics whose thuggery and primitivism ran unchecked in Meah Shearim for years”
“there is nothing in the pictures coming from  to differentiate the mobs in Beit Shemesh from those in  or .”
“barbarians at the gates of Beit Shemesh.”
“The extremists are not the equivalent of the poor, semi-literate unwashed masses in the Muslim suburbs of ”
From essay of Rabbi Adlerstein - Vos iz Neias
Beth Shemesh,  - The Charedi Hooligans Should Take Lesson From Rav Nosson Tzvi Finkel Zt'l
"Beth Shemesh,  - How dare you?
How dare you spit on an 8-year-old schoolgirl and terrorize her as she walks to school? I don’t care what she’s wearing; spitting, verbal abuse, and threats of violence cannot be tolerated."


"You are a thug and a hooligan"
anonymous essay from VIN
- Rabbi Yakov Horowitz: - 'Kanoim' Are Rodfim And Abusing Our Community
"As Rabbi Aryeh Deri clearly stated  in an interview earlier this week, the only solution to rid our community of the depraved kanoim who are wreaking havoc on our community is to demand that they be prosecuted to the fullest extent of the law."
"My dear friends, it has come to this. We have two choices. We can continue to blame the secular media for its campaign against our charedi community or we can admit the painful truth – that we collectively have allowed ourselves to be abused for many years now by a small and violent group of uncontrolled kanoim."
"For the sake of our children, we need to collectively do everything in our power – everything – to put an end to the abuse immediately."


Rabbi Yakov Horowitz VIN
- In Fiery Speech Noted Rabbi Suggests Violence Against Charedi Extremists Says They Are Animals
“They are the worst kind of evildoers, far worse than the most secular individual,” said Rabbi Zar.  “If I could I would break their arms and legs.  This is not just my opinion, it is the opinion of Chazal.  They would catch them, give them lashes and break their bones for their appalling behavior.
Rabbi Zar (???)

chaos in the street,
were a little innocent girl has been mistreat,
entire nation on their feet,
men women children defeat,

a group of extreme fanatics,
with radical agenda tactics,
armed with semiautomatics,
anarchy peril and dramatics,

to impose the taliban way of life,
segregate men and women they strife,
its their way or a knife,
no respect for human life,

they claim to be the oppressed,
its their country and everyone else is only a guest,
when in fact living in israel they should be blessed,
to the country they contribute zero but have constant requests,

in the name of a false god,
force people back to the gulag,
protesting in striped WW2 garb,
isolate its people into wire barb,

the world is watching with awe,
they have no regard for the law,
coming at us with a chain saw,
from world society they withdraw,

they dont recognize the land they live in,
to them its a game they must win,
our jewish heritage and values they spin,
psycho brains razor thin,
First attacks against haredim are taking already place in EY. The comments on various Jewish websites are just unbelievable. It is hard to believe that those are rachamim bnai rachamim who call for incarceration, boycott, separating children from parents and yes killings. I guess it is all OK for the commentators quoted above when subject of verbal and physical abuse are haredim. Or... perhaps there is something more in their aticharedism than protection of eight years old girl from Beit Shemesh?

The clip above i will leave without the comment, but i wonder why video below didn't create such uproar as one haredi spiting on the girl. Video below is used on the internet for few years already by various antisemities. My question is why didn't we look for reasons of behavior pictured in the clip below? Why no one scram about Chilel Hashem and so on? Is there any reason why religious settlers are treated different than religious people of Mea Sheurim and Beis Shemesh? Any comments?
http://www.youtube.com/watch?v=ALiyDNwgUGY


With all due respect, I think you have to read my post again. I clearly call acts of those individuals ‘despicable and in other place criminal, according to Torah standards.
What I object is depicting whole haredi community true prism of some hot headed, misguided individuals. But the same way as I describe my nonobservant Jewish brothers and sisters as those lacking proper information and not necessary rebellious to our Creator, the same or different privilege of doubt I can generate toward my observant fellow Jews who perhaps missed shiur on mussar or derech eretz.
What I’m afraid of is that it seems to appear that some of other observant Jews jumped on bandwagon of enemies of Torah to make their politics. Even some haredim from camps different than Satmar and Toldos Aharon are using events in Bais Shemesh and Mea Sheurim for their backyard politics. Unfortunately it may result in backslash against all of us, as the name, the stature of the haredi Jew will erode in minds of not only nonobservant but also all bnai Esaw in different countries.
And there you go: http://www.theyeshivaworld.com/news/General+News/113871/Charedi-Basher-Strassler-Explains-The-Chiloni-Hate-For-Chareidim-In-Haaretz-Column.html
Some of our frum people appear not to understand that they dancing to the music of the others and this music was designed to exhaust us from very beginning. Yes we should keep together, all people serving HaShem. Despite of our differences, united around of Torah and nothing else. Even when we think that some of others from us are mistaking, according to what we believe.
MW


Title from Jewish news websites and picture illustrating the title: 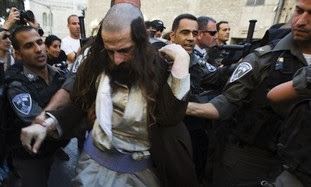 There you have it. To those who thought that their call for condemnation of 'out of control haredim' (whose control?) will direct the anger only against some sectors of the haredim and will spare those to whom they have closer ties, they were mistaking.
All of the haredim are hated, and by the way if any of the haredi group is famous for 'extreme' separation of sexes, are the Gerer Chasidim and not Hungarians who are hated for different issues.
See this: http://www.theyeshivaworld.com/news/General+News/114018/Litzman-Condemns-Attack-By-Chilonim-Against-Gerrer-Chossid-In-Ashdod.html
and this
http://www.theyeshivaworld.com/news/General+News/114081/More-Attacks-Against-Chareidim-In-Eretz-Yisrael---One-By-Border-Police-Officers.html

Finally some words of wisdom on the topic!
From Rabbi Lipschutz.
http://matzav.com/meah-shearim-the-stockholm-syndrome-and-us

The situation is a bit more complicated. The whole eruption that we see and hear about everywhere right now is cooking up from two sides for a while. Number 1= The issue of tzniuss and women's "rights" is long in the making from months ago when the buses in meah sheurim were officially segregated and they made their own bus line. To the segregation on the Williamsburg and monsey bbuses. the article on the web and all the boogers who followed the Willy bus Mr. Stupid who told a lady she must go to the back because "when Gd makes rule you don't ask why Gd made rule" then Mrs. Hillary hipocrit'on (skver=senate, anyone remember?) ,than spitting and the rest is history. But are the extrimest picked on or are they really voilent in all sitiuations? Number 2.....

Spiting on anybody is wrong but not violent; asking to go to the back of the bus person who we may suspect of evil will is stupid but not criminal. For calling to brake the limbs in some countries people are going to jail because it is violent and criminal.
Rabbis Adlerstein and Horowitz know that it is not policy of Eida Hareids to spit on the girls and call the names anyone; nevertheless they are using this opportunity to vent their frustration about haredim, frustration coming from different reasons, i guess. It is a shame to joint at the moment like this, those whom day and night are thinking and plotting how to destroy Torah lifestyle in EY and everywhere. It is a shame for intelligent person to believe this antireligious propaganda which is only a part of long lasting war against religious community in EY. It is a shame to joint myriads of anti-Semites barking around the world about immoral Jews.
I was told in my earlier years that Jews deserved their horrible fate because they were G-dless communists. Some of them certainly were and some of them committed crimes against humanity but that’s what anti-Semites always do, they don’t put Jews to the ovens over night, first they find the ‘reason’ which would justify their actions. They always will find the spot on the tents of Yacov filled otherwise with goodness; they always will look rather at the edges of klal Yisroel than the holy nation as the whole. That’s also why Amulek attacked the way he did.
At the times like this, even if I have some disagreement with my haredi brothers in EY and even I see some wrong doings coming from some individuals among them, I stand with them because one more time I see how power of evil is trying to do what they always want to do, to eradicate the holiness from the Earth.